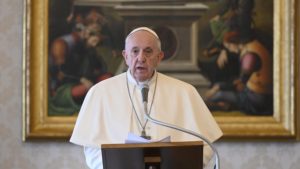 The Pope also announced that on the following Friday, 27 March, he will preside over a moment of prayer on the sagrato of St Peter’s Basilica, the platform at the top of the steps immediately in front of the façade of the Church. “I invite everyone to participate spiritually through the means of communication”, he said.
The ceremony will consist in readings from the Scriptures, prayers of supplication, and adoration of the Blessed Sacrament; and will conclude with Pope Francis giving the Urbi et orbi Blessing, with the possibility of gaining a plenary indulgence for all those who listen to it live through the various forms of communication. The blessing “to the City [of Rome] and to the World” is normally only given on Christmas and Easter.
The Director of the Holy See Press Office confirmed that the moment of prayer on Friday will be broadcast live from the Vatican, beginning at 6 pm Rome time (this would be 7 am on Th for those of us in Hawaii). He noted that the plenary indulgence attached to the Urbi et orbi blessing is subject to the conditions foreseen by the recent Decree of the Apostolic Penitentiary
more info at: https://www.vaticannews.va/en/pope/news/2020-03/pope-calls-for-christians-to-unite-in-prayer-for-end-to-pandemic.html
By Paula Scott|2020-03-26T00:19:04+00:00March 26th, 2020|Uncategorized|Comments Off on A special Urbi et Orbi blessing
Toggle Sliding Bar Area
Go to Top