In 1863, his older brother Pamphile who was given orders to leave for the mission in the Hawaiian Islands, became ill. Damien seized this opportunity and obtained permission from the Superior General to go in his brother’s place. He arrived in Honolulu on March 19, 1864, and was ordained to the priesthood on May 21, 1864. Damien was 23 years old at that time. His first assignment was to the island of Hawaii to begin his pastoral ministry.

In 1866, Hawaii established a leper colony on the Kalaupapa Peninsula. How leprosy spread was not understood at that time, let alone that most of the population have a built in immunity to it. This lack of knowledge resulted in the forced quarantine of leprosy patients. Fear and ignorance can easily separate us from our sense of humanity. Leprosy was spreading at an epidemic rate in Hawaii amongst the native Hawaiians. There was no Center For Disease Control at that time and the State Board of Health was the state agency responsible for making decisions as to how to handle this rapidly spreading epidemic. The solution to anyone diagnosed with the disease was to send them off to the Kalaupapa peninsula-a piece of land that was perfectly isolated from the rest of the world. This included children. They were young and vulnerable and fell prey to the older and stronger adults there.

For nine years, Father Damien worked on the Big Island (Hawaii) as a priest, leading an important, and productive life. Damien remained there for 10 years and accomplished a lot in that decade. During the Holy Week of Easter in 1873, he went to Maui to attend a dedication of a new church. The Bishop was looking for several priests to volunteer going to the Leper Colony on Molokai as there was much work to be done there. The thought was that he would recruit several priests and they would be there on a rotational basis. Damien volunteered and soon, he and the Bishop sailed over to the Kalaupapa Peninsula. He arrived there with just the clothes on his back, his Holy Cross and a breviary (a prayer book). He was supposed to only work in the colony for a limited time, then he would be replaced by one of three other volunteers for the work. But the leper colony was to become his permanent home. After working with the people for a time Father Damien grew attached to the people and his work. He asked permission to stay at the colony to serve. His request was granted.

Those that suffer from leprosy often do not have full use of their hands or legs-because leprosy is much like a rotting disease (an oversimplification). Death came almost daily. Those that died were buried in shallow graves because if you are sick, how can you bury a fellow human being if you physically can’t? Father Damien was horrified to witness the wild pigs coming along and uprooting these shallow graves and defiling the bodies that lay there. He vowed that the dead would given proper burials. In the first six years that Damien was at Kalawao on the Kalaupapa peninsula, he dug most of the graves and built most of the coffins for 1,600 people. He built over 300 homes and structures in the 16 years that he was there.

Not long after Damien arrived, he soon brought law and order to the population and essentially, became the parent and guardian to the abandoned children that were exiled there. He formed a girl’s choir which became very popular with the residents. Over time, he built a home for the boys and a home for the girls; giving them the shelter and protection that they needed.

If one were to write a job description for all that Damien did, somewhere near or at the top of the list would be, ‘advocate’. He wrote numerous letters fervently and often. He wrote to the State Board of Health. He wrote to his superiors in the Diocese. Some made enough of a difference to nudge the powers that be. Often, he felt that his letters fell on deaf ears. He persisted, nonetheless. In a letter to the Board of Health dated December 6, 1877, he wrote: “You are aware that for the general welfare of the lepers I have sacrificed my health and all I have in this world…Your most humble and obedient servant, J. Damien, Catholic Priest.”

On a daily basis, Father Damien cleaned and changed the bandages of the lepers. He was horrified that the residents were left to their own with no personnel to give medicine and keep the gaping wounds clean and bandaged. Some patients would have large chunks of their sides or limbs or digits rotted away and full of maggots and infection. The disease of leprosy also affects the nerve endings to the areas of affliction. There is no physical pain that can be sensed in the areas of the disease. He sent many letters to the state and the Diocese to send medical help and supplies along with his continued requests for building materials.

In a letter to his parents in August 1873 (just several months after he got there), he wrote, “My greatest pleasure is to serve the Lord in his poor sick children rejected by other people.” And, in another letter in 1874, he wrote, “In tears I sow the good seed among my poor lepers. From morning to night, I am amidst heartbreaking physical and moral misery. Still, I try to appear gay, so as to rise the courage of my patients.”

Daily, he strove to not only heal their wounds, but their spirits.

By 1884, just 11 years after his arrival to the peninsula, Father Damien was diagnosed with leprosy. After he himself contracted the disease in 1885, Damien was able to identify completely with them with the words, “We, Lepers.” Father Damien became a witness of the love of God for His people. His strength came from the Eucharist as he himself wrote: “It is at the foot of the altar that we find the strength we need in our isolation…” It is there that he found for himself and for those he served the support and encouragement, the consolation and the hope that made him “the happiest missionary in the world,” a servant of God and a servant of humanity. 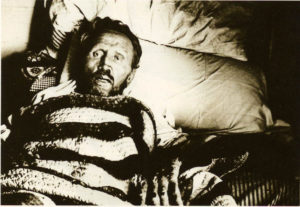 The image pictured above of Father Damien was taken shortly before he died. The photo was taken by Dr. Sidney Swift who felt that it was important to document this man’s death. Shortly before Damien’s death, the doctor arrived at the priest’s rectory with a box full of glass plates and a camera mounted on a tripod. It was this photo of Father Damien that went around the world after he died that became the agent of change that Damien had so hoped for. It was as though in his death, he became the ‘poster child’ for leprosy. It raised public awareness to such a degree that it finally made a difference for the people of Kalaupapa. 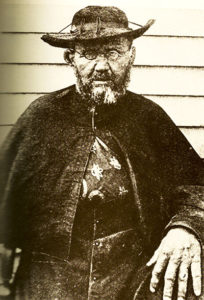 “Look at my hands, all the wounds are healing and the crust is becoming black…I have seen so many lepers die, that I cannot be mistaken. Death is not far off. I have seen visions of the good God calling me to celebrate Easter with Him. May God be blessed for it. ” Father Damien, 1889. 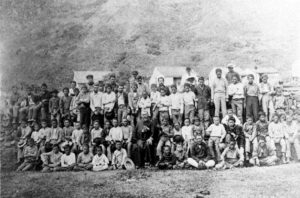 Image taken about 2 weeks prior to his death. Image credit: Wikipedia Commons

The photo above was also taken by William Brigham. If you look closely, his arm is in the sling of the silk scarf that Mother Marianne gave him. Note too, as to how many young boys are residing in Kalaupapa-such young ages to be exiled for life away from your home and family and without any provisions for guardianship.

Father Damien died on April 15, 1889, having served sixteen years among the patients with leprosy. His mortal remains were transferred to Belgium in 1936, where he was interred in the crypt of Saint Anthony’s Chapel, the Church of the Congregation of the Sacred Hearts of Jesus and Mary at Louvain. His fame spread to the entire world. In 1938 the process for his beatification was introduced at Malines (Belgium). Pope Paul VI signed the Decree on the “heroics of his virtues” on July 7, 1977.

In Father Damien, the Church proposes an example to all those who find sense for their life in the Gospel and who wish to bring the Good News to the poor of our time. Through Damien’s life, we see unending faith, a dedication to vocation and Church, advocacy, a healer, comforter, builder, and compassion. In 1995, Father Damien was beatified by Pope John Paul II in Brussels. On October 11, 2009 Pope Benedict XVI raised Father Damien to the rank of “sainthood.”  Saint Damien’s Feast Day is May 10.

The day of his passing, April 15, is a minor statewide holiday in Hawaii.

Saint Damien is the patron saint of people suffering from leprosy. 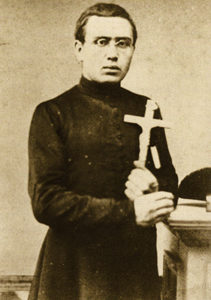 Damien, brother on the journey, happy and generous missionary, who loved the Gospel more than your own life, who for love of Jesus left your family, your homeland, your security and your dreams.

Teach us to give our lives with joy like yours, to be in solidarity with the outcasts of our world, to celebrate and contemplate the Eucharist as the source of our own commitment.

Help us to love to the very end and, in the strength of the Spirit, to persevere in compassion for the poor and forgotten so that we might be good disciples of Jesus and Mary.

Office of the Provincial Congregation of the Sacred Hearts, Damien Servant of God, Servant of Humanity, Franciscans of St. Anthony Guild, New Jersey.