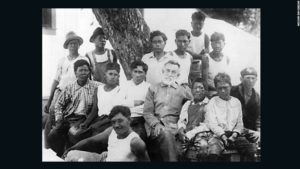 Although Saint Damien and Saint Marianne are world renown for their examples of compassion, faith and service, many others also came to Kalaupapa to kōkua. Some were relatives and some were strangers. One man was named Ira Barnes Dutton, a veteran of the Civil War who decided to devote his life to compassionate service following a few chapters of a wayward and sinful life.

After learning about the plight of Father Damien, he knew his calling was to serve this heroic man. At age 43, he gave away all of his possessions, boarded a steamship to Hawaii and arrived at Kalawao in July 1886. Without any request for recompense, he offered his help to Father Damien. Damien’s aloha and appreciation for Dutton’s service led him to convey upon him the honorary title of Brother Joseph Dutton. For almost two years he worked side by side with Damien, helping with building projects and caring for the sick and suffering. “Every day,” one biographer writes, “he marveled more and more at the courage he saw around him — bravery, he often said, much greater than in the war he had been through.” He made a difference. Before Father Damien’s death in 1889, Father Damien said: “I can die now. Brother Joseph will take care of my orphans.”

After Damien’s death Dutton founded the Baldwin Home for men and boys with financial assistance from Henry Perrine Baldwin. Dutton stayed on Molokai for the rest of his life, spending 44 years caring for young boys and men suffering from the effects of Hansen’s disease.

Brother Dutton never contracted the disease during his 44 years working at the Kalawao leprosarium. He accepted no pay and directed that his military pension be given to the monks at Gethsemane. He said: “It has been a happy place — a happy life” shortly before his passing on March 26, 1931. He was buried in the grave next to St. Damien at St. Philomena Church, Kalawao.

Brother Dutton is being considered for sainthood and in November 2021 it was approved for him to advance to the next stages of evaluation for beatification and canonization. The Joseph Dutton Guild is lending their energy to the cause, and are looking for reports of “favors” attributed to Dutton’s intercession. To submit a report or inquiry, email josephdutton@rcchawaii.org or connect to one of their social media sites.